Marc Wucherer, member of the Executive Board at Bosch Rexroth AG, recently stated that ctrlX AUTOMATION was the “brain” of the modern factory. He appears to be right; the reactions to the open control concept are full of praise. As was the case with VHE Industrial automation. The Eindhoven-based company recently designed the first machine in the Netherlands to combine the motion function with the control platform ctrlX CORE, the heart of ctrlX AUTOMATION. “You can include a lot of useful technology,” says Software/Motion Engineer Rob van Kempen of VHE.

Quickly up and running

Rob van Kempen recently joined VHE as a Software/Motion Engineer. He witnessed the integration of ctrlX AUTOMATION in the new smart cable cutter from up close. “What struck me immediately was the open structure of the ctrlX AUTOMATION architecture. A big advantage for me as a recent graduate: I could work in any programming language I wanted. Of course I had to get used to this new way of working but that didn’t take very long. By now we can get any machine with ctrlX CORE up and running in no time at all.” Among other things, VHE pre-assembles cable systems for companies that work with semiconductors. Project Leader Teun Jaspers: “We supply plug and play cable bundles that already contain all the necessary cables. The fact is, though, that there are some limitations to cutting all those cables to length. For example, we could previously only cut a maximum length of fifty meters, simply because that measured the total length of our cutting line. In addition, it was a labor-intensive project; the operators always had to walk considerable distances.”

Not a centimeter more or less

VHE wanted to improve on those two points; an optimization of the cable run out and the possibility to cut extra lengths. “At the same time, we looked at whether we could further increase the quality and accuracy,” says Jaspers. The project was also successful in that aspect; from now on it’s no longer necessary to ‘teach’ machines to measure cable lengths. From the Zerox production system, developed by VHE, the ctrlX CORE downloads algorithms, such as lengths and diameters, straight into its own data layer. As a result, the amount of unusable test product has been reduced to virtually zero. Jaspers: “Thanks to the control system ctrlX CORE, the teaching process has become a thing of the past. Furthermore, fifty meters is now really fifty meters, not a centimeter more or less.”

By integrating the ctrlX CORE, VHE is the very first company in the Netherlands to combine the system with drives (motion). “It contains a lot of technology,” shares Rob van Kempen. “Perhaps a little too much, if you look purely at the relative simplicity of our machine. But for us this is more than a functional application; we have used as much of the technology as possible to gain practical knowledge, so that we can also serve our business contacts in the future, using more advanced machines. There will be a demand for it, guaranteed.” Van Kempen thus describes one of the advantages of ctrlX AUTOMATION; the possibility to easily download individual solutions as apps from the ctrlX AUTOMATION ecosystem (or create them yourself and get them up and running quickly). “Because you can run all kinds of different apps on one and the same core, you need far fewer separate hardware components. It will make matters a lot clearer. For example, the core includes an HMI; you can communicate with it via the browser of any device within the network. The PLC application also runs on the core. And if you want to expand further, with an extra functionality? Then you simply install the relevant app and it runs.”

Van Kempen sums up the various ctrlX AUTOMATION applications effortlessly: “Take the PLC app for handling IO/PLC tasks, such as fluent communication with Zerox, in which we process work instructions and process elements in addition to technical details of the order. Or take the open OPC UA server app, which allows the Web-IQ to communicate with ctrlX Data Layer.” There is also the motion app for controlling the two axles, an EtherCAT app for communication between the Remote IO and the drives, and an application that – like cutting the cables to length – enables communication between the Zerox production software and the REST API and data layer.

Also worth mentioning is the Web-IQ application for the HMI function. Van Kempen: “From any device in the VHE network, you can connect to the ctrlX CORE and have it function as an HMI. We host it as an application on the ctrlX CORE and we can use it in a regular web browser. In this way everyone who logs in, not just the operator, can view all process characteristics. The position of the drum, the position of the linear guide, the position of the cable clamp, accelerations and decelerations… you name it.”
In general, the features of ctrlX AUTOMATION meet all the requirements of the VUCA world (volatile, uncertain, complex and ambivalent markets); it enables users to act flexibly, independently, future-proof and data-proof when it comes to demand-oriented costs, according to the expert from VHE. 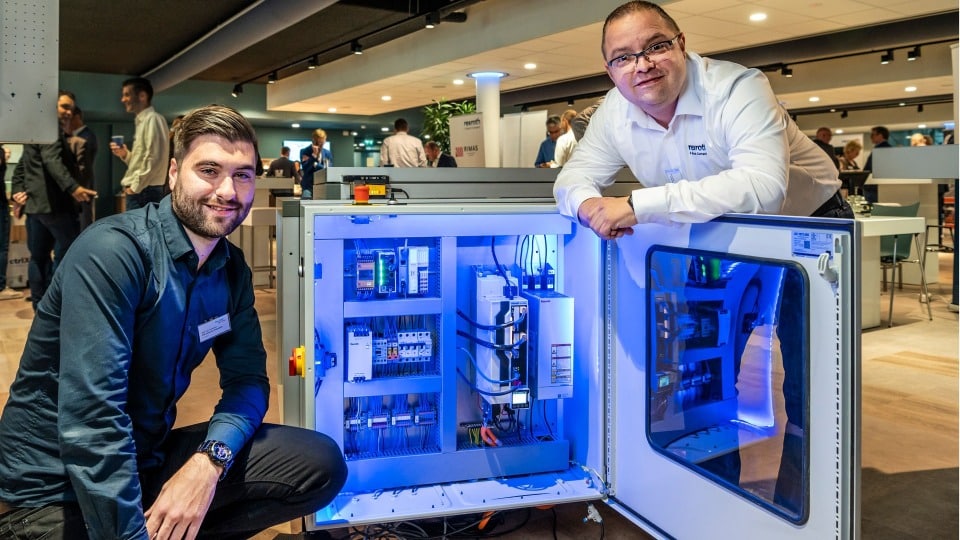 The realization of the new VHE cutting line (equipped with two Bosch Rexroth servo motors – one for the drum rotation and one for the cable transfer) is partly due to the good collaboration between VHE and Bosch Rexroth. “There’s a reason why we are a certified excellence partner” according to Jaspers. “The collaboration is excellent and the lines are short.” Van Kempen is also full of praise for the partnership. “I especially liked the pleasant structure of the weekly consultations and meetings. We speak the same language and half a word is enough.” On the part of Bosch Rexroth, De Git fully agrees. “Our relationship with VHE has existed for many years, we work together in an accessible way. Their knowledge of motion, drives and the development of quality software fits in well with our core business. In fact, when I’m on location at VHE, my contacts almost feel like proper colleagues.”

All in all, the VHE staff are positive about the completion of this project and are full of expectation regarding the next steps. Teun Jaspers: “It was a wonderful voyage of discovery, in which we fulfilled the role of testing ground. We have discovered the advantages and possibilities of ctrlX CORE and ctrlX MOTION. I expect this efficiency to prove itself more and more in the future; in my view it is increasingly moving in this direction.”